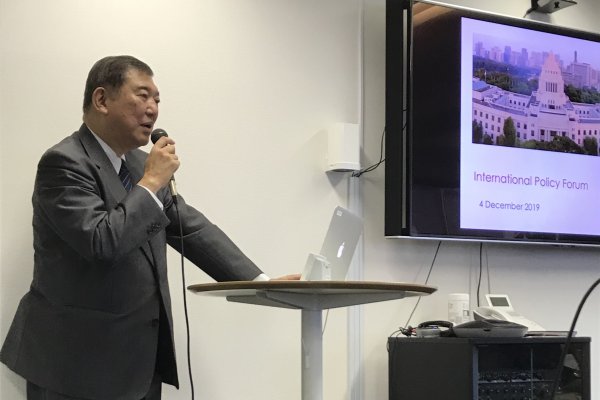 The beginning of the Reiwa era marks the end of Japan’s post-war era;
Japan’s thinking needs to react to the fact that the nature of capitalism has changed, including an increase in economic inequality;
Japan’s democracy needs a new vision and new goals, in keeping with these changes and the end of the post-war era.

The International Policy Forum (IPF) is an exclusive series of events hosted by GR Japan.  It connects a variety of stakeholders, including the business and diplomatic communities, academia, civil society and government on matters of policy interest.

Mr. Ishiba shared three observations about the change from the Heisei era to the Reiwa era – the first change of imperial era in 30 years: the end of the “post-war” mindset; increasing income inequality combined with the impacts of a shrinking and aging population; and the need to respond to changes in the nature of democracy in Japan.

On the end of the post-war era, Mr. Ishiba noted that in Reiwa Japan, very few citizens will have had direct experience of conflict.  Past prime ministers such as Yasuhiro Nakasone, who passed away at age 101 on 29 November, and the late Kakuei Tanaka, served in the wartime military but there are no current Diet members who actually fought in the war.  Mr. Ishiba said that Japan’s current educational curriculum does not adequately examine Japan’s involvement in or the reasons for Japan’s ultimate defeat in the Pacific War, and he is concerned that younger generations tend todo not understanding the consequences of conflict.

Mr. Ishiba also noted the changing nature of capitalism, including the issue of rising income inequality coupled with a rapidly shrinking and aging population.  He expressed apprehension over domestic income inequality between ordinary Japanese citizens and big businesses, which has grown in the last six years, and which is becoming one of a factors in Japan’s economic unsustainability.  He also stressed the need to have an exit strategy from current excessive monetary easing status, noting, however, that it would be irresponsible to pursue an exit without indicating the kind of social structure and economic solution Japan is aiming for.  Mr. Ishiba drew attention to the unprecedented situation facing Japan in terms of population decline and ageing, highlighting female empowerment and regional revitaliszing regional economiesyation as key factors in dealing with these changes.

Mr. Ishiba also highlighted changes in the concept of democracy in Japan.  He identified three key elements for a well-functioning democracy: large number of citizens exercising their right to vote; open dialogue to respect minority opinion; and access to unbiased information to create a healthy environment ofor speech.  He argued that some of those elements are currently missing in Japan.  He stated that the nation’s identity and goals have changed over time from strong-army strong-nation during the pre-war period and the pursuit of material prosperity in the post-war era.  Now that the nation is moving beyond the post-war period it is essential, he said, to find and form new collective values and goals.  In closing, he pushed for the establishment of a society where diverse values and opinions can co-exist and enrich communities.

Mr. Ishiba’s presentation was followed by a lively question and answer session with forum participants.  He answered questions on the political unrest in Hong Kong and the recently concluded US-Japan trade deal, stating that the focus on cars and tariffs meant that there could be no win-win outcome and appealing to Japan and the US to ensure that the impact on other aspects of the alliance are limited.

Please stay tuned for more updates on the IPF series and meeting reports.

IPF Breakfast Meeting with Shigeru Ishiba, Member of the House of Representatives