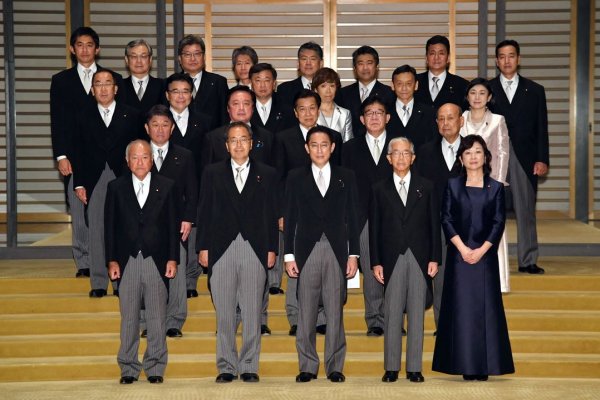 Fumio Kishida was officially anointed as Japan’s 100th prime minister on 4 October 2021, following his appointment as leader for the Liberal Democratic Party (LDP) on 29 September. Announcing his new Cabinet, Kishida had said that he would provide more opportunity for younger Diet members, and thirteen of the twenty members appointed will be taking up a Cabinet post for the first time. It is noteworthy that many ministers have connection to the Ministry of Finance (MOF). Different to the outgoing Prime Minister Yoshihide Suga, and Shinzo Abe before him, Kishida has stated that he will promote a more consultative process of policy decision-making. This is likely to move the policy decision back to a more traditional setting where the LDP Policy Research Council had more weight. Given the seniority of the newly appointed aides to the Prime Minister, there is also a chance that the decision-making power will devolve further to the Japanese ministries, where senior ministry officials have a stronger say over policy.

The Cabinet’s young and middle-ranking Diet Members include Noriko Horiuchi as Minister for Vaccines, Takayuki Kobayashi as Minister in charge of Economic Security, and Karen Makishima as Digital Minister. All are in their third terms. While minimal, the number of women in the Cabinet has also increased from two to three. This inclusion of younger Diet Members, however, does not necessarily mean a material change or a generational shift, as the portfolios they are put in charge of are quite light. While younger Diet members such as Kobayashi are capable, they are also likely to be directed by senior party members such as Kishida and former Minister of State for Economic and Fiscal Policy Akira Amari, newly appointed as Secretary General of the LDP.

The impression of this Cabinet is that Kishida has made safe choices and rewarded those who backed his presidential campaign. The lack of any high-profile or popular appointments is worth attention, especially as national elections are imminent. Taro Kono, Kishida’s campaign rival, was demoted from Minister for Vaccines and Administrative Reform to the LDP’s Chair of Public Affairs; and Shinjiro Koizumi, who supported Kono, was removed from his post as Minister of Environment. Sanae Takaichi, while a leadership rival, was backed by Shinzo Abe and comes from a closer political school than Kono, so was recognized with the position of Chair of the LDP’s Policy Research Council. Seiko Noda was appointed Minister in Charge of the Declining Birthrate, the Children’s Agency and Regional Revitalization.

Toshimitsu Motegi, as Minister for Foreign Affairs, and Nobuo Kishida, as Minister for Defense, provide elements of continuity with the previous administration. The division of posts between the factions is roughly balanced, with four each from the Hosoda and Takeshita factions; three each from the Kishida and Aso factions; and two from the Nikai faction. There are three ministers with no factional affiliation. The Ishiba and Ishihara factions both missed out on appointments.

The term of office of the members of the House of Representatives expires on 21 October. Until October, most forecasts put the election in the first or second week of November, the closest to the latest date allowed under Japanese law. Kishida has made the decision to bring the date forward: to dissolve the House of Representatives on 14 October and start the election period on 19 October, with the voting date on 31 October. Kishida is said to have made the decision based on the political schedule and work to prepare the budget for FY2022. The more likely reason is the desire to take advantage of a brief “honeymoon” period with positive opinion polls after his Cabinet appointments. Given lukewarm support from Japanese voters, the LDP is aiming to avoid any drop in support that could occur with a later election date. The House of Representatives has held elections 27 times since the end of World War II, but this will be the first time that a vote will be held after the term of office of the members has expired.

Taro Aso has stepped down as Minister of Finance after nearly nine years in the role. His successor is Shunichi Suzuki, whose father is the past Prime Minister Zenkou Suzuki. Formerly of Kishida’s Kouchikai policy group, and currently in the Aso faction, Suzuki is also Taro Aso’s brother-in-law. It is expected that Aso will continue to direct financial policy from behind the scenes. Suzuki is also said to favor a cooperative approach like Kishida, rather than a top-down one.

Koichi Hagiuda replaces Hiroshi Kajiyama as Minister of Economy, Trade and Industry. Hagiuda is member of the Hosoda faction and is known as one of Shinzo Abe’s closest aides, serving in various roles including Special Advisor to the LDP President, Deputy Secretary General of the LDP, Deputy Chief Secretary of the Election Strategy Headquarters, and Chief Deputy Secretary General. From 2019, Hagiuda served as Minister for Education, Culture, Sports, Science and Technology under the Fourth Abe Cabinet. Early discussions identified Hagiuda as Kishida’s Secretary General for the LDP, but his proximity to Abe drew opposition from some party factions. His appointment to the Ministry of Economy, Trade and Industry (METI) is a nod to his and Abe’s influence in the LDP.

A notable new post in the Kishida Cabinet is the Minister in charge of Economic Security, assigned to former MOF official and parliamentary vice-minister of defense, Takayuki Kobayashi. Kobayashi, from the Nikai faction, attended the same high school as Kishida (Kaisei High School in Tokyo) and has been appointed after just three terms in the Diet. As Minister in charge of Economic Security, he is expected to craft a national strategy to stop and reverse the drain of technology and expertise from Japan. While Kobayashi is seen as one of the young “up and coming” LDP members, it is likely that he will follow instructions from senior Diet members.

Shigeyuki Goto was appointed to replace Norihisa Tamura as Minister for Health, Labor and Welfare. Goto was formerly an official in the Ministry of Finance, reaching the position of director of the Tax Bureau’s Planning and Coordination Office. He was elected to the House of Representatives in 2000 and is currently serving his sixth term. His most recent positions relating to health and welfare include Chair of the LDP Headquarters for Novel Coronavirus Countermeasures; Executive Acting Secretary General for the Headquarters on Strategies for 100 Year Living; Chief Secretary of the Research Commission on the Social Security System; and Chair for the Committee on Long-term Care. He is close to the Japan Pharmaceutical Manufacturers Association (JPMA) and has a detailed understanding of the pharmaceutical industry.

Shinsuke Suematsu was appointed as the Minister for Education, Culture, Sports, Science and Technology. Suematsu is currently in his third term, having served as Parliamentary Secretary of Finance (2008) as well as State Minister of Land, Infrastructure, Transport and Tourism, State Minister of Cabinet Office, and State Minister for Reconstruction (2016). He is part of the Hosoda faction of the LDP.

Replacing Shinjiro Koizumi, the new Minister of Environment is Tsuyoshi Yamaguchi. Yamaguchi is a former member of the Democratic Party of Japan who joined the LDP in 2014. He is now a member of the Nikai faction. Before he entered politics, Yamaguchi was a diplomat who worked in China, England, Pakistan and the United States. Under the Noda Cabinet, Yamaguchi was State Minister of Foreign Affairs. Energy debates will be a feature in Kishida’s tenure, and while Kishida has expressed no particular passion for renewable energy, he may have chosen Yamaguchi as someone who can deftly handle the issue on the international stage. Yamaguchi said at a press conference on 4 October that he would aim towards a 46% reduction in greenhouse gases by 2030, as per the government’s plan, and consider how to make renewable energy a primary power source. At the outset, however, he appears to have less interest and passion in the issue than his predecessor, Koizumi.

Kishida has retained Toshimitsu Motegi as the Minister for Foreign Affairs. The decision implies that the Japanese government will continue with the same stance on neighboring countries such as China, North Korea and Taiwan. The prospects of tension with China and subsequent need for Japan to take a firm stance are increasing. Kishida said recently that it was unclear if China could be a member of the Trans-Pacific Partnership, while Motegi stated that Japan would welcome Taiwan as a party to that agreement.

Daishiro Yamagiwa has been appointed Minister of Economic Revitalization. Yamagiwa belongs to the Aso faction but is also close to Akira Amari. His previous positions include the Parliamentary Vice-Minister of Cabinet Office in charge of Economic Revitalization (2012-2013); State Minister of Economy, Trade and Industry (2014-2015); Director of the LDP Economy, Trade and Industry Division; and Director of the Budget Committee of the House of Representatives. His appointment rewards support for Kishida in the leadership election. He is expected to take up discussions on energy and the economy.

One of the individuals with greatest influence in the Kishida administration will probably be Toshihiro Nikai’s successor as Secretary General, Akira Amari. Amari has been a powerful figure in the LDP for many years, holding positions that include Minister in charge of Economic Revitalization, Minister in charge of Total Reform of Social Security and Tax, Minister of State for Economic and Fiscal Policy. Amari was one of Kishida’s earliest supporters for the presidential vote, despite being from the same faction and electoral district as Taro Kono. His support earned him a central role in the Kishida administration.

Aside from the Cabinet, Kishida’s choice of aides is also worth attention. Former Vice-Minister of Economy, Trade and Industry and Kaisei High School alumnus Takashi Hatoyama has been appointed as executive secretary. Two of the other secretaries are from the MOF: Hirotaka Unami, the Deputy Director of the Budget Bureau, and Mitsuteru Nakayama. Both come from relatively senior positions in the ministry. At the same time, Kishida chose not to appoint a secretary from the MHLW. This suggests that there is going to be a strong emphasis on fiscal discipline and a perhaps a critical eye on the value of innovation.

In terms of changing political clout, LDP Diet members, the Kishida faction, the MOF, and Kaisei High School alumni appear to be key, as many of the appointees under Kishida are either connected through his high school or associated with the MOF. MOF officials have been in contact with Kishida ever since Suga announced his decision to resign. The ministry is expected to exert a strong influence over his policy-thinking.

There are distinct changes between the Suga and Kishida administrations. Even with a decentralization of power from the Prime Minister’s office, it is not immediately clear in what direction the Cabinet will drive Japanese policy. The most immediate challenge is the lower house election on 31 October. Despite public dissatisfaction with the LDP’s response to COVID-19, it is unlikely that the vote will result in a change of government, even if the LDP loses some seats.